As glad as I am for the new year I have to say I always feel so rushed to make the January Birthday cards.  I have so many for this month.  At least so many for me.  January is a busy month.  Kids are going back to school.  Ok well usually kids are going back to school.  This year my grandkids, who I usually watch, will be remaining remote with their schooling due to the pandemic.  We all usually de-decorate our homes from Christmas and start decorating for Valentines Day and there just doesn't seem to be enough hours in the day to squeeze in birthday cards.  Oh and I have to remember to mail them lol.   The important ones are children so I quickly checked and my little grandnephew turns 6 this month.  He's such a cutie and obsessed with Sponge Bob.  SO since I can't see him I'll send a Sponge Bob card with a check.  Actually I'll have his mom pick the card up as a porch pick up since I don't trust the mail. heeheehee.  So here's my quick card. 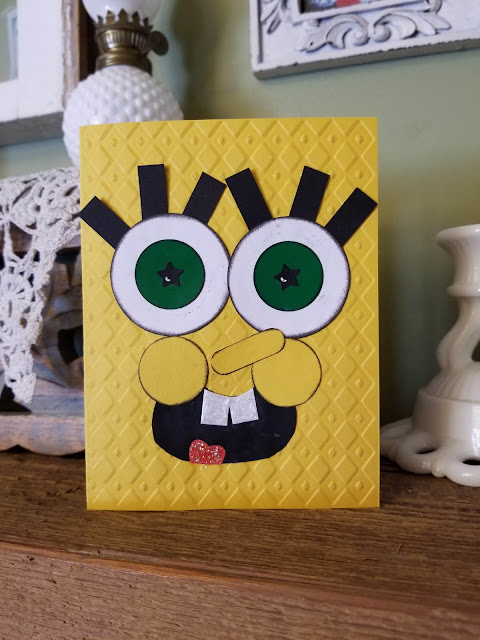 Someone told me Sponge Bob has Blue eyes...oh well my Bob has green.  I also put stars as pupils because I couldn't find my small circle punch.  Ughhhh...my craft room is such a mess!

Next I resized the card I made in my last post so that it would fit in a 5 x 7 envelope.  Since these papers were already out from the last card I just used the same ones.  I did put the towers together a slight bit differently just so I could tell myself it was different.  I also used different embellies since this was not for a 25th birthday.  Though I'm sure she would have appreciated being thought of as a 25 year old! 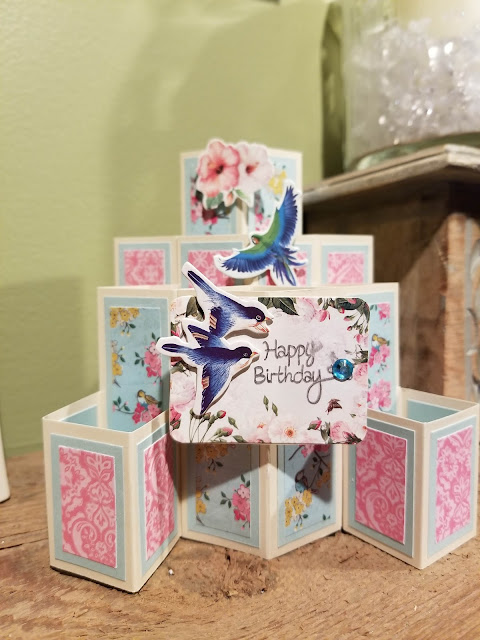 I still missed a few other birthdays.  Shame on me I even missed my sister in laws.  Thank goodness she understands.  I actually made a card for a friends husband and for one of my past neighbors but I was running so behind that I slipped them in envelopes and right into the mail before getting a picture.  Story of my life lol.

My niece turns 25 this January and its so hard to believe that once upon a time I held that sweet girl in my arms.  I was blessed to be her God mother.  Though truth be told during the Christening her twin brother was being such an angel and she was screaming bloody murder and pushing me away that I asked my sister if I could have John instead lol.  As she grew she became more and more interested in all kinds of crafts and couldn't wait to spend time at my house crafting.   So I wanted to make an extra special card and my all time favorites are fancy folds.  I found this one on line it's super cute so this is my inspiration.   HERE

I'm using an older collection from Heartfelt Creations called Wildwood Cottage as the designer paper and Recollection blue shimmer paper is used for the base. The matts are made by a lone 12 x 12 sheet of textured bazzil I think (it's not marked) and I have no other sheets in this exact color tone.  As I progressed I found that 1 sheet was NOT enough for the entire card as planned so I had to omil some sections that were supposed to be matted.  These were inside sections of the cubes and I decided that I could get away with not doing those.  Although I think I would have liked it alot better if I was able to complete it.  But with the virus still high in my area I refuse to go into stores and you just can't color match on line. 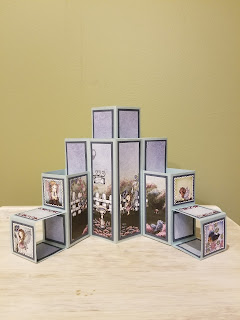 Above is just having all the papers glued down.  It doesn't look bad as is but you know me I need to bling up everything.  So I will be making the embellies and using stickles to pretty it up. 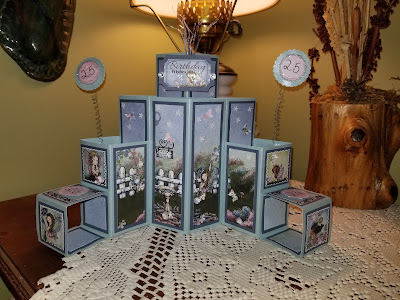 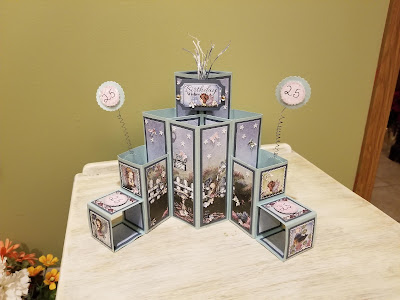 I am a bit dissappointed in my camera skills.  You do not see all the glittering I did in the photo.  I Glittered areas of the background paper and then popped out and glittered all the flowers and butterflies.  The numbers 25 have glitter around the circles too.  This card is so much prettier in real life.  My niece is going to love this.  Now as for an envelope.  Well this is a HUGE card.  It measures 7.5 " x 9" when folded closed so I decided to just mail it in a manila envelope.  Not pretty I know but since I won't be going into any stores any time soon and her birthday is the 7th it is what it is.  I think I will work on trying to down size this card so that the next one can at least fit into a 5 x7 envelope.