Awhile ago I made a Kewpie Christmas card using some graphic 45 papers and I really loved the simplicity of the card.  Well today I'm doing a little twist using the envelope  punch board by WRMK.  Dimensions are the same so it is still a mini Slimline card.

Here's what you'll need for this card: 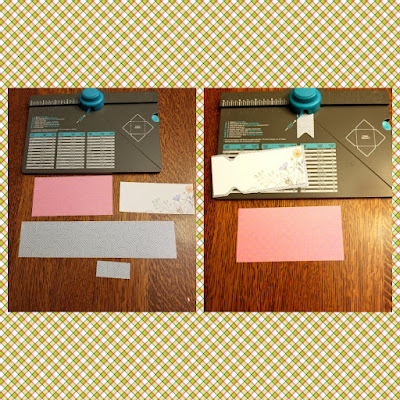 Pop it all together and Such a cute change up! 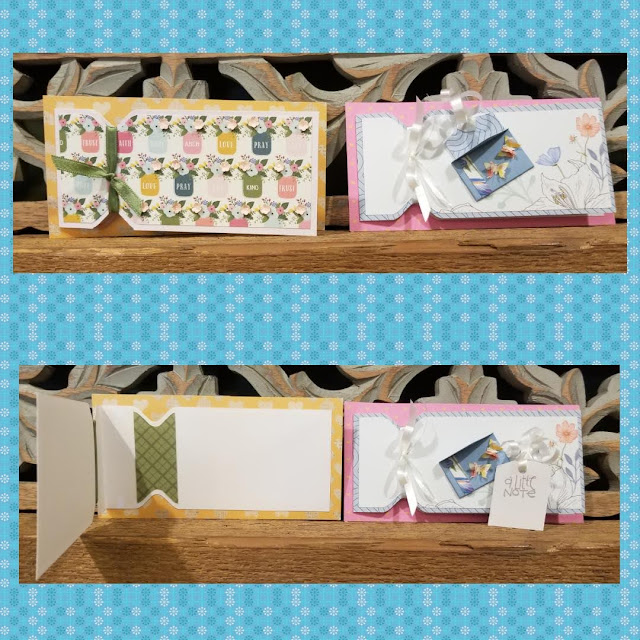 Hope you enjoyed this change up.  This goes together lickity split!  10 minutes TOPS!  i think the longest time is picking out the paper lol, but once thats done...cutting, gluing and embellishing takes no time at all. Oh and before I close here's one I did for my daughter in laws Birthday.  I also decorated the envelope.  Remember these are mini Slimline cards that fit in the standard security envelopes from the Dollar store. 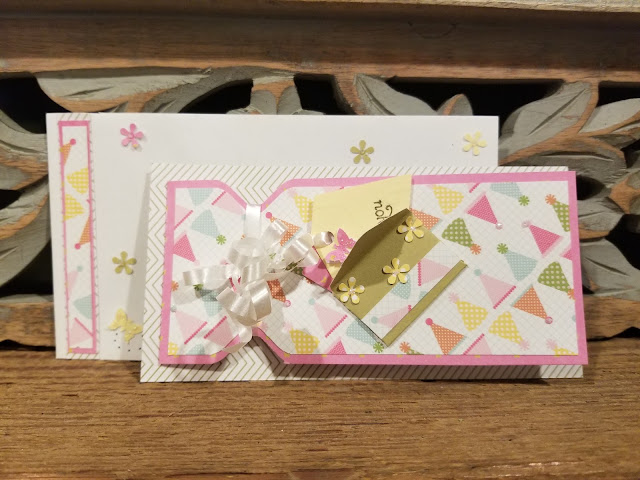 Oh my goodness these are cute cute cute.  You can whip a ton of these up just watching TV.  Now are they Tags? Or are they Embellies?  Well...I think they are both!  You can be rediculously redundant and use it as an embellie on a tag or a cute little extra on a card.  Then again tack it onto a gift and it's a tag all by it's self in a cute little pocket.  It's all up to you.  Another plus you can get 2 from a 6 x 6 inch piece of cardstock and you can use single sided stuff.  How many of us have pads of cardstock that we've picked up as a deal even though it's single sided?  How many of us have 12 x 12 sheets with prints way too big for a card that is in those pads that we keep skipping over.  Yep!  Alot of us do.  So I went through some of mine and this is what I did.  First I cut them all down to 6x6's.  Then the 6x6's that looked the prettiest are the ones I used.  The others went into a pile to be cut down into tag bases.  After all with a white back they will be perfect.

Here are the measurements: 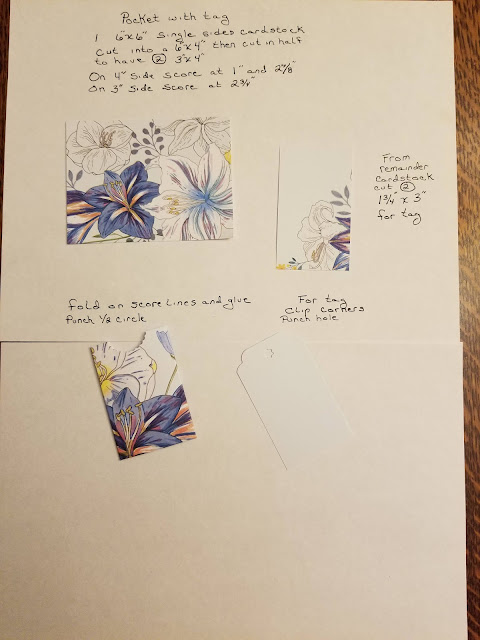 SO I can see it's a bit hard to read from the picture so you can just use that as a visual. 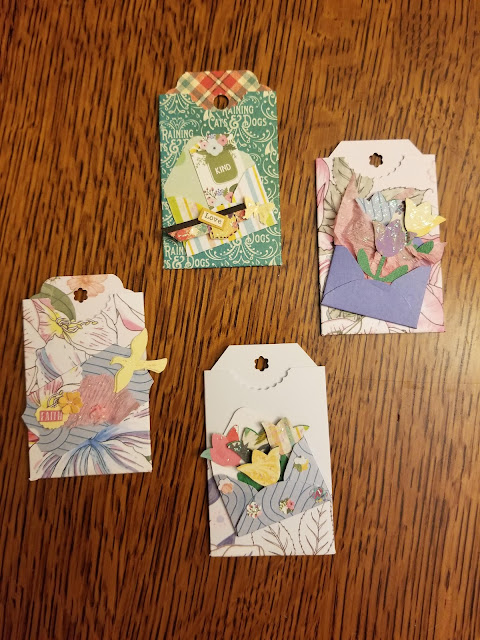 I used all homemade embellies.  Little envelopes with flowers, tickets, birds, stickles etc.  Just have fun.  Heck I even used some streamer pieces that were stuck to my curtain rods from my granddaughters birthday party over the weekend.  The sky's the limit!  Just have fun.

I plan on making a bunch of these and slipping them in with Happy mail when I send some.  As long as I don't add too much bulk they should go through the mail just fine.  Oh yes and the finished size of these cuties are just about 2" x 3 1/4". Give or take a wee bit.  I think they would make cute additions to Christmas tags with all the left overs I always seem to have.

The Card with the TOWER in the middle

So as I had said before, look up Tower Card and there is a world of different opinions as to what is the tower card.  My Birthday Tower card that I posted a while ago with the little flaps on the sides ends up having different names.  So I have no idea what I am going to call my Easy Peasy Halloween and Christmas cards once I get around to making them.  For todays post I am just going to show you a few variations of tower cards and a name that has been attached to it.  These are all easy and are all built the same way but depending on who's link you click on, even though it can look identical to another, the size could be totally different.  Alot of the finished cards out there end up being 6"x6".  Don't worry I have a measurement for a standard 4.25" x 5.5" too.  I also tried and tried to see if a Tall Slimline card was even possible as a tower/pinwheel/windmill type card but the only tower card I could manage to make was a basic one like my corner card.  Any taller than that corner card and the slightest breeze or too many embellies makes it totally top heavy and down she comes!  LOL.

Ok so lets get started. 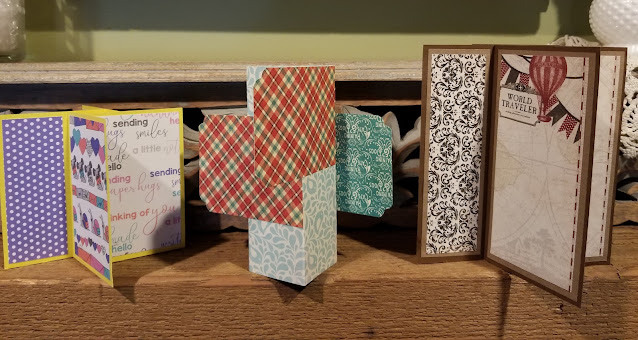 Going from left to right.

First up a 4.25 x 5.5" Tower card also know as a Pinwheel card and known as the Never-Ending Tower card.  It took me awhile to understand the never-ending part because I have made never-ending cards before but I watched this woman's video and realized she made each page to be like the front of a new card.  Then I had the "OH!" moment.  It makes it a bit bulky but cute idea.

Measurements:  (For less bulk it is wise to use dsp for center tower and flaps.)

glue to form tower with 1 flap already attached.  This is a skinny center.

fourth flap is already part of the tower.

Middle card.  Now this one is a 5"x7" when done.  Yeah I know kind of big.  I am not a fan but someone might like it.  This was called a Windmill card.  Again put together the exact same way and just adjusted the flap size and placement.  I really was not a fan of this size though.  It just looked off to me.  But maybe it was the way the flaps were placed.  Maybe if you did the 4.25x5.5 you could cut those flaps in half and alter the placement for a similar look in a smaller size and it might look better.

Next measurements for the 6x6".  Like I said they are all built the same basically.  Just a little tweek of the flap sizes.  This was also called a Pinwheel card.  Now this card is an optical illusion.  To me it looks more like a 5x7 but when you take an actual ruler to it, it does measure 6x6 when closed flat.  Weird right?  I am not a fan of square cards but in this case I really like the look of this one.

Here's a Slimline I tried to make into a Pinwheel and it was WAY too big so I cut down the flaps and it looked dumb so I turned the flaps into flags.  I got this far and it still did not fit into a legal size envelope.  I may have been able to make the tower part skinnier but it might not stand at all the lol so I just quit.  I thought I'd share my fail as well.  I still plan to use it as a strange looking tag on my grandsons birthday gift just so I don't have to throw it out😄 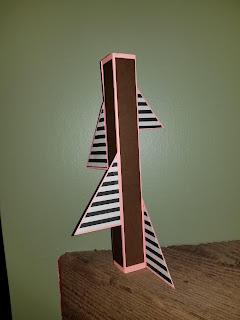 Then I found this one lady who succeeded with a slim line card and thought "Susan!  You don't make it super tall you make it wide! DUH!"  For some reason I was fixed on the fact that it was suppose to stand 9" tall.  Never even thinking that you can make it the other way giving you way more real estate to decorate.

Well that worked! LOL  I'll get to that another day.  This post is already a bit long.

I opted to post these without the final decorations since it took me so long to figure out each one and write everything down.  All the layers that I did were 1/4" smaller than the flap.  Ok except the center card.  The 5x7  The one I didn't like lol.  I didn't put any layers on that at all and used dsp for the center and the flaps.  Basically I did that because somesone said it would be less bulky if the tower was DSP and not cardstock.  I wasn't sure if it would be sturdy enough.  Well it holds up just fine.  Personally I prefer the look I think of card stock but maybe thats because of the paper I used doing the DSP version.  I'll try it again later.  I do not think that I would put 3D embellies on these.  I think I would just put maybe a word die or something else flat.

WHAT"S IN A NAME?