Ah Ha I found 2 photos!  A bit blurry but you get the jest.  Every year family comes up to the lake house for the 4th of July.  We are lucky enough to have our own private beach that over looks the lake harbor.  To our left is the east is the Yacht Club where we can view beautiful sunrises from our beach and if we look to our right, the west, we have a view of the town and the Marina where there are beautiful sunsets.  It is our perfect get-a-way.  One the 4th of July our town has the fireworks display over the lake so the perfect viewing spot is......of course.....our beach!  This year I wanted the grandkids to help make it a bit festive and decided we were going to make pool noodle firecrackers to decorate the beach.  Only 1 problem.  We only got 2 done when my husband and I came down with covid and left to go home to our main residence in hopes of keeping the others safe.  Well that didn't work as 3 of the remaining 5 from our cabin got sick and that prevented the rest of our family members from gathering on the beach for the evening fireworks display.  Needless to say it was the 4th that wasn't meant to be this year.  But 2 firecrackers did get made and next year will be better.

So we needed pool noodles.  I got the red ones from the Dollar Tree.  I also picked up Blue and white Duct tape from the Dollar Tree and the fancy top pokes.  This project just took tape.  2 stripes of white on the red noodle and then we wrapped about 6" from the top with blue tape.  I had a roll of white vinyl for my Cricut that I used my star hand punch and punched a bunch of stars.  To get the noodles to stand in the sand I bought a few brooms from the Dollar Tree too and the handles fit right into the noodles hole.  The poles can be used over and over again.  As for the pool noodle.....although all the tape held up well considering this was on a beach with harsh sun and beating winds, the red color of the noodle faded to a light pink.  Now this could be because they were left up until September 5th.  I know!!!  Talk about being too lazy to pull a stick out of the sand!  LOL  Anyway I figured it will give the kids something to do for next year. 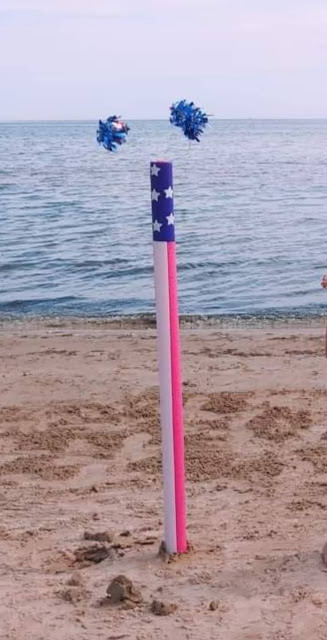 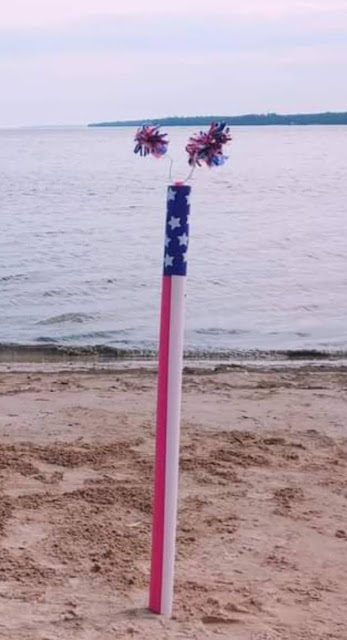 Well that's it for being behind on the crafty end.  Sorry these are too late for this year but hopefully you'll remember them for next year.  I sure hope I remember!  LOL

Way late for the 4th of July

Do you ever fall way behind?  I mean super behind?  So far behind that in reality you should just put it off until next year but you're afraid if you do that you'll forget all about it and never get around to it until you realize you're behind again.  So, that's where I am now.  I had made some crafts that I had all intentions of posting for the 4th of July.  One I'm not even sure if I can find a photo of and the other is this one.  I decided to share it with you anyway even though late so you could get a head start for next year.  Well maybe.  Ok who am I fooling?  Not many people start 4th of July crafts a year early.  I know I sure don't.

I saw this idea in an email I get daily from Hometalk DIY Ideas .  At least I think that was the email.  I get so many that are similar.  Anyway they have various links for different projects and one was for an Uncle Sam hat made with a 2x4.  Super cute idea  I had decided to make mine out of a scrap piece of 2x8 instead,  The original one had straight sides but I wanted fancy so I had my husband taper the bottom to 6" and then curve the top a bit.  I had some origami paper that had stars and stripes so I decided to first stain the edges of the wood and then decoupage it to the wood.  My husband cut me a brim which I added the star paper to.  Although it had gone on smoothly, by the time it had all dried there were numerous bubbles all over the hat.  I knew I could re-activate the glue by applying heat so I took an iron and tried to iron out the bubbles.  some came out but not all.  I used both of these for a table decoration this year but I wasn't thrilled with the outcome and I'll re-do them next year but the idea is pretty cool.  In fact I think they would make great St Patty's hats too.  Paint them green and sprinkle ALOT of glitter because more is always better LOL 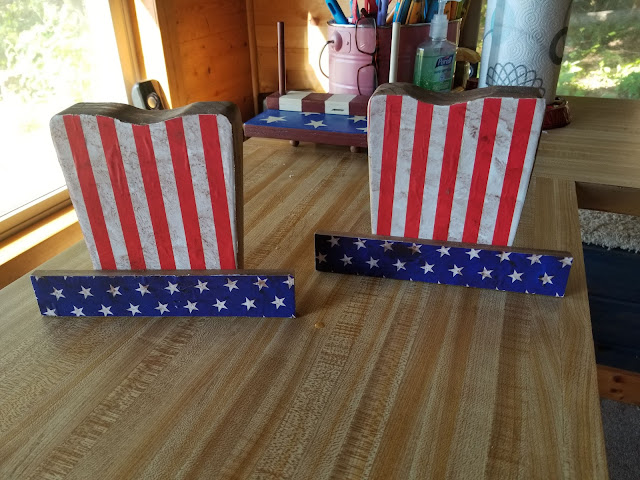 Well I'm off to find my other 4th of July craft photos.  If my next post is something else you'll know the photos are gone and I will definitely have to do a re-do next year.  What's the craft you ask???  A firecracker made from a pool noodle used as beach decor.  Do I have you intrigued?